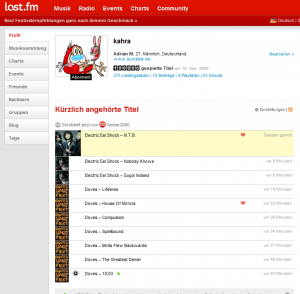 Reaching 100,000 scrobbles at Last.FM was a great, but very short moment. It last for about 3 minutes until the counter increased again. Nevertheless I“ve reached it at the 23th of August 2010. To find out more about the competition go to the original post.

Congratulations to all participants

Because there where only 8 participants all of them are winners and will receive a one of the prices. After some complex calculations I determined the following order of winners:

I will contact all winners within the next one or two weeks to tell them what they“ve win and how to obtain their price.

At the time of writing the article for the competition I had about 91,000 scrobbles. This was at  May 13th. So I needed about 102 days for listening to about 9000 songs, means about 89 songs a day. Personally I expected reaching 100k scrobbles by the end of July or first week of August. 89 songs a day is not really much. To make the number a little bit more precise we have to subtract weekend days, because I“m typically only listening to Last.FM on working days, when I“m at work. 102 days are about 14 weeks, so we could subtract 28 days, what means there are 74 days left for listening to music, what“s a new ratio of about 121 songs a day. I think this is a more realistic value. Maybe there is a tool out there, which can calculate the average ignoring all days no song was scrobbled.

Maybe the next competition could be reaching 150k scrobbles. But for this I“ve to think about some more complex rules.

By the way: Does anybody know the artist with the most played songs (most listeners) ever?

My personal top three are:

Maybe we should try to guess when the first artist will reach 500 million plays and who this artist will be?